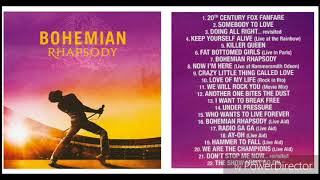 Personnel: Brian May (vocals, guitar); Freddie Mercury (vocals, piano); Roger Taylor (vocals, drums); John Deacon (bass guitar).
Photographers: David Bailey ; Watalu Asanuma; Neal Preston; Peter R”shler.
The soundtrack to the 2018 Queen biopic Bohemian Rhapsody offers a fittingly cinematic portrait of the iconic rock band, built around a handful of the group's most well-known songs, including live versions and several tracks reworked specifically for the film. As a souvenir of the movie, the soundtrack works especially well. Opening with guitarist Brian May's arrangement of the "20th Century Fox Fanfare," and showcasing his distinctive searing guitar leads, it perfectly sets the tone for telling Queen and Freddie Mercury's story on the big screen. Here we get such beloved classics as "Somebody to Love," "Killer Queen," "Another One Bites the Dust," and "Under Pressure." Elsewhere, the soundtrack leans heavily on live performances, especially those culled from the group's dynamic appearance at 1985's Live Aid benefit concert. This is especially poignant as the show marked a resurgence in interest in the group, just as Mercury was beginning to lose his battle with AIDS. Similarly, we also get earlier live versions of songs like "Keep Yourself Alive" from 1974's Live at the Rainbow, "Fat Bottomed Girls" from 1979's Live in Paris, and "Now I'm Here" from 1975's Live at Hammersmith Odeon. Also compelling are the few songs specifically reworked for the film, including "Doing All Right," a song from the band's self-titled debut that May and drummer Roger Taylor originated in their proto-Queen band Smile, and their studio-to-live mix of "We Will Rock You." A thoughtfully curated soundtrack, Bohemian Rhapsody offers a compelling narrative of Queen's storied arc into rock legend. ~ Matt Collar

25%off
Donald Trump - National Embarrassmints
$2.98 on Sale
Add to Cart