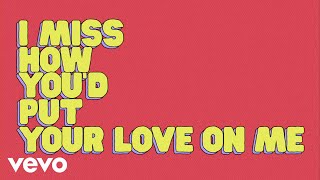 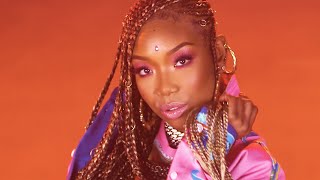 Billboard - "[T]he electro-soul sound of B7 -- which she co-wrote and co-produced top to bottom for the first time -- puts the bounce back in Brandy's step."
NME (Magazine)
3 stars out of 5 -- "Brandy's new album was worth the wait -- not simply because of its ear-candy qualities, but also because it has helped one of R&B's most revered talents find her smile again."

Photographer: Derek Blanks.
Brandy laid the indestructible foundation of her musical legacy with three platinum albums in eight years. On the last song of her fourth album, she claimed hard-fought control and contemplated retirement. Albums five and six spread across a quadrennial release schedule as the singer directed her energy to other pursuits and went through a lifetime's worth of personal and professional setbacks. Considering all of that and an ensuing album drought of almost eight years, Brandy's relationship with music seemed reluctant at best, even as the dry spell was mitigated by gutsy independent 2016 and 2019 singles and a Grammy-nominated duet with Daniel Caesar. The collaboration with Caesar and support from the likes of Solange made it clear that Brandy would at least have a place reserved for her. It's seemingly the approach of those two younger artists -- progressive, deeply thoughtful, unequivocal R&B with no pandering to the mainstream -- to which Brandy adheres on B7. Brandy co-wrote each song and had a hand in the production of almost all of them, joined primarily by Darhyl Camper (Toni Braxton, H.E.R.), Kim Krysiuk (Ariana Grande's "7 Rings"), and LaShawn Daniels (who co-wrote Brandy and Monica's "The Boy Is Mine" and a bunch of other hits, and died before the album was completed). The whole set has a slightly coarse-grained quality that heightens the tension expressed in the lyrics, much of which works out grave personal and interpersonal crises. Snaking beats, fluid bass lines, and cascading harmonies, mixed with lyrical references to (and the sound of) flowing water, ease the friction by evoking constant steady motion. The contrast Brandy provides herself is similar. Her voice is deeper than ever with increased grit, and at the same time, her voice has never sounded so wise, comforting, and pacific. Not everything is burbling tumult, either. The slap-and-tickle slow jam "Rather Be" and dizzied love song "No Tomorrow" are two of the sweetest songs in her catalog, while "High Heels" and "Baby Mama," collaborations with daughter Sy'rai and Chance the Rapper, add power and light. Moreover, there's joy and relief in hearing Brandy lay her troubles down. She and her fellow writers and producers have put together the type of album that drowns out the world and keeps giving with each play. ~ Andy Kellman

32%off
Al Green
I'm Still In Love With You / Love And Happiness TOP 100 Bestseller
$3.40 Super Savings
Add to Cart