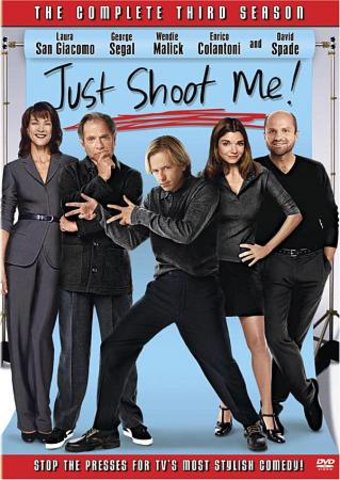 Maya Gallo (Laura San Giacomo) is a feisty, often combative news reporter who, after losing her job at a New York television station, is forced to get a job at Blush, her father Jack's (George Segal) fashion magazine. There, she must contend with a difficult former model, Nina (Wendie Malick), Jack's obnoxious assistant, Dennis (David Spade), and an overly randy photographer, Elliot (Enrico Colantoni). This box set contains all 25 episodes from the series' third season, in which French Stewart (THIRD ROCK FROM THE SUN) guest stars as one of Maya's potential suitors, a children's television show host with some rather strange confrontational issues.

The sassy stars of Blush magazine are back with more hilarity in the third season of JUST SHOOT ME! Join Maya, Jack, Nina, Elliott and Finch for 25 side-splitting episodes of the six-time Emmy®-nominated and seven-time Golden Globe®- nominated series. This witty ensemble comedy explores the often tumultuous and always hysterical dynamic between five quirky staff members of a high fashion magazine. Available on digitally re-mastered DVD for the first time, the deadlines, models and hangovers are even more hilarious than you remember. Funny has never been so fashionable!