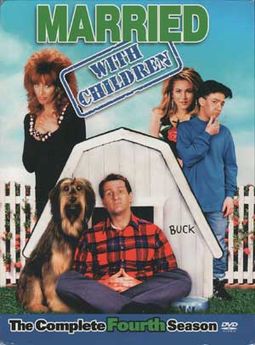 The most popular underachievers of the early 90s, the Bundys delivered a constant deluge of politically incorrect, macho jokes replete with sexual innuendo and an unabashedly crude flavor. The fourth season doesn't disappoint, with patriarch Al (Ed O'Neil), a women's shoe salesman and misanthropic malcontent, perennially battling his shopaholic wife's spending sprees, as well as her amorous advances. Peg (Katy Sagal), for her part, is a ditzy but curvaceous redhead who shows surprising cunning when it comes to getting her way. Daughter Kelly (Christina Applegate, ANCHORMAN: THE LEGEND OF RON BURGUNDY) takes after her mother in every way, a blond bombshell with a deficient IQ. Bud Bundy (David Faustino) rounds out the family, with his anomalous intelligence and high opinion of himself running contrary to his success with the ladies. In this season, the Bundys' influence on neighbor Steve (David Garrison) finally becomes too much for his wife, Marcy (Amanda Bearse), to handle, and she divorces him. This provides incentive for Peg to take newly-single Marcy to Las Vegas, where the pair's gambling ambition far outweighs their coffers.