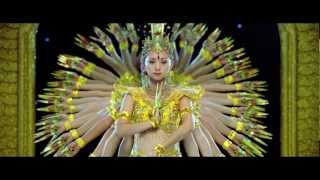 Director and cinematographer Ron Fricke offers a striking glimpse into some of the world's most remarkable happenings in this visually spectacular documentary. Following in the same template as 1992's BARAKA (also directed by Fricke), SAMSARA is a study in the ways humanity works as a collective and as individuals, with the cycle of human existence providing the subtext for the parade of images (the title is a Tibetan word meaning "the wheel of life"). Combining scenes of destruction and rebirth, images of profound humanity and mechanized lifelessness, BARAKA includes remarkable images of people working together en masse, including Muslims visiting the holy city of Mecca, hundred of Chinese dancers performing a synchronized routine, and prisoners doing group exercises in a prison yard. Fricke filmed SAMSARA over a period of several years, shooting on 65mm film stock and transferring the footage to 4K high-definition video for post-production and exhibition. SAMSARA received its world premiere at the 2011 Toronto International Film Festival.

25%off
Danger in the Streets: Traffic Safety Films of the Past
$5.95 on Sale
Add to Cart