The most fantastic...most exciting serial ever made! 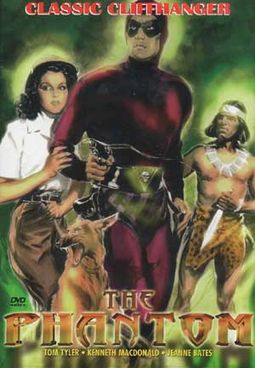 Professor Davidson and his lovely daughter Diana search Africa for the Lost City of Zoloz. Legend pegs it to be the source of a vast hidden treasure. Their search is hindered by a local crook, Singapore Smith, who wants the treasure for himself. It is further complicated by Dr. Bremmer, an international criminal, who plans to destroy the peace with the local native tribes and build a secret air base at Zoloz.

Fortunately, The Phantom, who is also Diana's fiance, is more than a match for the two villains. The Phantom, with his superhuman strength, manages to outwit each enemy move, escaping from one death trap after another: avalanches, poison gas, flaming pyres, and explosions fail to shake his fearless spirit. With the help of his four-footed pal Devil, he finally overpowers all the enemy factions and brings peace to the jungle once again.

Another exciting serial adventure produced by Columbia Pictures and based on one of King Features' funny-paper heroes.

Based on the King Feature comic strip hero "Phantom," an exciting serial adventure produced by Columbia Pictures in 1943. Includes 15 episodes: "The Sign Of The Skull," "The Man Who Never Dies," "A Traitor's Code," "The Seat Of Judgement," "The Ghost Who Walks," "Jungle Whispers," "The Mystery Well," "In Quest Of The Keys," "The Fire Princess," "The Chamber Of Death," "The Emerald Key," "The Fangs Of The Beast," "The Road To Zoloz," "The Lost City," and "Peace In The Jungle."

Customer Rating:
Based on 498 ratings.


I LOVE TOM TYLER! IN 1941, WHEN HE PORTRAYED CAPTAIN MARVEL(BY THE WAY,MY ALLTIME FAVORITE SERIAL) THAT SPECIFIC ROLE GAINED TOM SUPERSTARDOM! TWO YEARS LATER, HE BACKED UP CAPTAIN MARVEL WITH THE PHANTOM! IRONICALLY,THIS SERIAL DID NOT HAVE THE SUCCESS THAT CAPTAIN MARVEL HAD AND YET IT IS JUST AS EXCITING AS CAPTAIN MARVEL! TOM TYLER STRIKES A VERY UNIQUE APPEARANCE AS THE PHANTOM AS WHEN YOU SEE IT, TOM GIVES AN EXCELLENT PERFORMANCE AND MAKES YOU BELIEVE THAT HE IS THE PHANTOM! OVERALL,THIS SERIAL IS VERY GOOD!