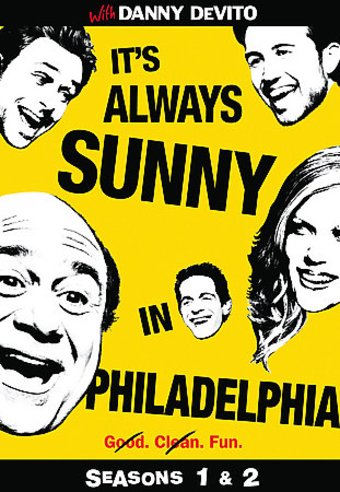 Disc 2: IT'S ALWAYS SUNNY IN PHILADELPHIA - Season 2: "Charlie Gets Crippled," "The Gang Goes Jihad," "The Gang Gives Back," "Dennis and Dee Go on Welfare," "Mac Bangs Dennis' Mom," "The Gang Runs for Office"

Disc 3: IT'S ALWAYS SUNNY IN PHILADELPHIA - Season 2: "Hundred Dollar Baby," "Charlie Goes America All Over Everybody's Ass," "The Gang Exploits A Miracle," "Dennis and Dee Get a New Dad"

Philadelphia is known as "The City of Brotherly Love," but the town may soon be famous for its bad behavior thanks to this mean-spirited comedy. This darkly comic sitcom isn't for the easily offended, but it garners critical praise and loyal fans with its smart writing. Rob McElhenney, Charlie Day, Glenn Howerton, and Kaitlin Olson star as friends who run Paddy's Irish Pub. Fuelled by alcohol, vanity, and selfishness, the foursome has a series of misadventures that inspires both cringing and laughter. In the second season, veteran actor Danny DeVito returns to TV to play two of the characters' misanthropic father. Though most sitcoms don't joke about crack addiction, abortion, and racism, IT'S ALWAYS SUNNY IN PHILADELPHIA turns these taboo subjects into unlikely comedy goldmines. This release includes the first and second seasons in their entirety, plus episode commentary, bloopers, and more.