With No Power Comes No Responsibility 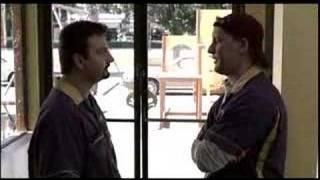 In 1994, writer-director Kevin Smith scored a surprise indie hit with the low-budget, black-and-white CLERKS, which won awards at the Sundance and Cannes Film Festivals and has attracted a growing cult audience over the years. Following such movies as MALLRATS, CHASING AMY, and DOGMA, Smith returns to his roots for CLERKS II, a very funny, very raunchy sequel. It's been more than 10 years, but Dante Hicks (Brian O'Halloran) and Randal Graves (Jeff Anderson) are still working at the same Quick Stop video and convenience store in New Jersey--until it burns down. They both end up finding jobs at the nearby Mooby's, a fast-food joint (with the motto "I'm Eating It!") managed by Becky (Rosario Dawson). While Dante gets prepared to move to Florida to marry Emma (Smith's real-life wife, Jennifer Schwalbach), Randal harasses geeky "Funployee of the Month" Elias (Trevor Fehrman), a dweeb who worships the Transformers and believes, much to Randal's consternation, that THE LORD OF THE RINGS is superior to STAR WARS. Also back are Jay (Jason Mewes) and Silent Bob (Smith), who contribute their own warped world view of sex, drugs, and rock & roll. The film features a string of cameos by familiar faces from other Smith films, including Jason Lee, Ben Affleck, Walter Flanagan, and producer Scott Mosier, as well as Kevin Weisman (ALIAS), Ethan Suplee (MY NAME IS EARL), and Wanda Sykes (CURB YOUR ENTHUSIASM); and the excellent soundtrack ranges from Talking Heads and the Smashing Pumpkins to King Diamond and Smith vet Alanis Morissette. And beware the donkey.