Meat Loaf Braver Than We Are 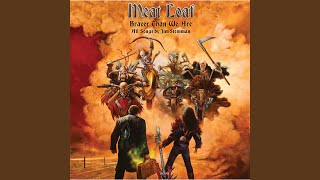 Who Needs The Young (Music Video) 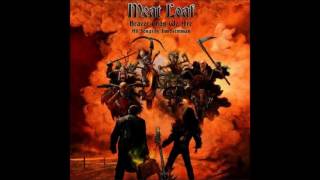 Entertainment Weekly
"The opening cut sets the tone: 'Who Needs The Young' mish-mashes doo-wop, Kurt Weill, and boogie rock, then throws in some Brian May-like guitars for extra flounce." -- Grade: B-

Personnel: Randy Flowers (vocals, guitar); Stacy Michelle (vocals); Paul Crook (guitar, synthesizer, loops); Danny Miranda (guitar); David Luther (strings, saxophone); Justin Avery (strings, piano, synthesizer); John Miceli (drums); Alicia Avery (background vocals).
Audio Mixer: Paul Crook .
Recording information: The Neverland Express; Wally's Wilderness.
Photographer: Martin H„usler.
Arrangers: Jim Steinman; Meat Loaf; Paul Crook .
Jim Steinman parted ways with Meat Loaf sometime after their improbable 1993 blockbuster Bat Out of Hell II: Back Into Hell. He contributed a couple of songs to its 1995 sequel, Welcome to the Neighborhood, but by the time Meat Loaf was ready to do a third installment of Bat Out of Hell, Steinman opted out for unspecified reasons, leaving the singer to use five previously released Steinman songs as produced by Desmond Child -- a satisfactory compromise that at the very least illustrated how Celine Dion's "It's All Coming Back to Me Now" should've been on a Bat Out of Hell album. Through a series of circumstances, Meat Loaf and Steinman wound up reuniting for 2016's Braver Than We Are, which was produced by Paul Crook, just like its 2012 predecessor Hell in a Handbasket. While the record bears some slick modern hallmarks, it is very much a throwback, evoking memories of Todd Rundgren's overblown Springsteen parody of 1977 as well as the earnest re-creation of 1993. Steinman's songs are suitably theatrical -- the opening "Who Needs the Young" feels like it's a Broadway reject -- and while he slyly winks at his past with "Going All the Way Is Just the Start (A Song in 6 Movements)," a song that features a cameo from "Paradise by the Dashboard Light" singer Ellen Foley, he also seems unaware that Ratt also got to the title "Loving You Is a Dirty Job" in 1990 (albiet after Steinman whose composition first appeared as a Bonnie Tyler single in 1985). That isolation is ultimately a benefit because Braver Than We Are feels caught between nostalgia and indifference, an album so old-fashioned it seems happily ignorant of modernity even when it threads EDM rhythms and metallic guitars into "More." The other way it's possible to tell this album was released in 2016 is Meat Loaf's performance. Thin and sometimes breathless, he's no longer the colossus of the '70s, but the diminishment of his range humanizes him and adds a bittersweet tinge to this reunion. Through Meat Loaf's voice alone, mortality becomes evident and it makes this third reunion with Steinman all the sweeter. Braver Than We Are may have its flaws -- it's too staid and self-conscious, for one -- but Steinman never found a better interpreter for his songs than Meat Loaf, and Meat Loaf never sounds more like himself than he does when singing Steinman, and that's why the album works. ~ Stephen Thomas Erlewine

Meat Loaf
Bat Out of Hell III: The Monster Is Loose
$13.60 CD Sale
Add to Cart

Meat Loaf
Midnight at the Lost and Found
$13.60 CD Sale
Add to Cart