Barbershop: The Next Cut PG-13

Everybody's back for a fresh cut 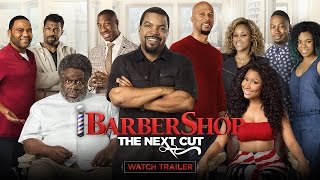 In the latest installment of the hit comedy series, Calvin (Ice Cube), Rashad (Common), Eddie (Cedric the Entertainer), and the rest of the crew at the barbershop are now working alongside a number of female hairdressers. Soon, they are all forced to band together to stop the violence in their Chicago neighborhood, and their plan includes brokering a truce among rival gangs and giving away free haircuts to promote their message of peace. Regina Hall, Anthony Anderson, Nicki Minaj, Sean Patrick Thomas, Eve, Jazsmin Lewis, J.B. Smoove, Lamorne Morris, Utkarsh Ambudkar, Margot Bingham, and Deon Cole co-star. Directed by Malcolm D. Lee.