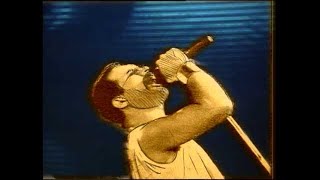 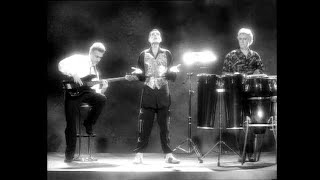 Queen: Freddie Mercury (vocals, keyboards); Brian May (vocals, guitar, keyboards); Roger Taylor (vocals, keyboards, drums, percussion); John Deacon (bass, keyboards).
Recorded at Metropolis Studios, London, England and Mountain Studios, Montreaux, Switzerland.
Personnel: Brian May (vocals, guitar, keyboards); Freddie Mercury (vocals, keyboards); Steve Howe (guitar); Mike Moran (Spanish guitar, keyboards); David Richards (programming).
Recording information: metropolis Studios, London, England.
Photographers: Simon Fowler ; Steve Howe.
INNUENDO would turn out to be Queen's swan song, as it was the last album released during vocalist Freddie Mercury's lifetime--he passed away several months after the album's release. Expanding on the successful back-to-basics sound of 1989's THE MIRACLE, INNUENDO was another solid outing. And like it's predecessor, it contains several tracks with lyrics that are clearly autobiographical for the band and especially Mercury, particularly "These Are the Days of Our Lives" and "The Show Must Go On," which deal with the topic of mortality.
Not all of INNUENDO deals with serious topics, however--"I'm Going Slightly Mad" and "Delilah" both contain humorous lyrics and were designed to be taken lightheartedly. The epic title track, which opens the album, is an instant Queen classic on first listen, built similarly in structure to past Queen classics "Bohemian Rhapsody" and "Somebody to Love." A pair of wonderful hard rockers, "The Hitman" and "Headlong" can be found on INNUENDO, as can a couple of lush ballads--"Don't Try So Hard" and "Bijou." Looking back, Queen went out on a definite high note with INNUENDO.