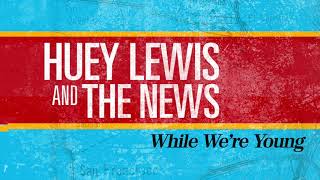 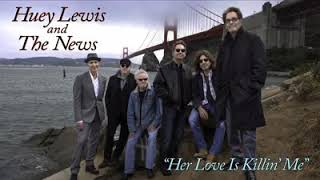 Billboard - "[B]ased on the infectious groove and witty lyrics of their literally lovesick advance single 'Her Love Is Killin' Me,' the News' supremely affable good-guy pop-rock hasn't gotten any less headline-worthy in their absence."

Personnel: Johnny Colla (vocals, guitar, saxophone); James Harrah, Stef Burns (vocals, guitar); Huey Lewis (vocals, harmonica); Sean Hopper (vocals, keyboards); Bill Gibson (vocals, drums); Rob Sudduth (tenor saxophone); Johnnie Bamont (baritone saxophone); Marvin McFadden (trumpet).
Audio Mixer: Bob Clearmountain.
Recording information: El Cazador, Los Angeles, CA; Lizard Rock Studio, Solvang, CA; M'side Studios, San Anselmo, CA; The Troutfarm, San Rafael, CA.
Clocking in at 26 minutes, Weather feels more like an EP than an LP, but there's a reason for the brevity. While Huey Lewis & the News were completing their first album of original material in nearly 20 years, Lewis was diagnosed with Meniere's disease, an affliction that effects hearing. Meniere's meant Huey could no longer hear notes clearly, which meant that he had to retire from performing, which in turn meant that the music the News completed for their new album would in effect be their final album. Since Huey Lewis & the News wrote and recorded Weather without planning it as a goodbye, the album has a light, breezy tone, and that amiability is actually a fitting farewell for a group who always were a hard-working rock & soul combo. Weather finds the News favoring the soul side of that equation, which should come as no surprise considering how their last album a decade prior was a tribute to Stax Records. If the album's production is a shade too precise and polished, the quality of the originals and the presence of a cover of Eugene Church's "Pretty Girls Everywhere" more than compensate. With one notable exception, the tracks are firmly songs for a sunny afternoon, with the opening "While We're Young" carrying not a note of bittersweetness. The exception is the closing "One of the Boys," a sweetly nostalgic, twangy stroll through the past that feels like a nod to the group's country-rock beginnings as Clover. Arriving at the end of this cheerful set of rock & soul, it seems like the one time the News are taking stock of their mortality, but the rest of the record captures them at their best, delivering good-time music with a smile. ~ Stephen Thomas Erlewine