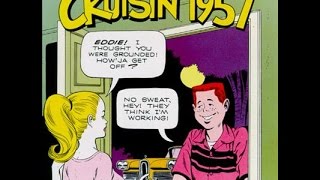 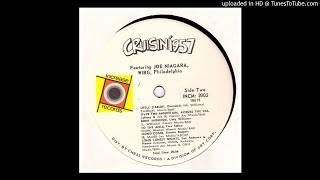 The predecessors of hip-hop MCs or just thwarted rock & rollers with giddy natures? Early rock & roll DJs -- heirs to the trailblazing, early-'50s R&B and blues DJs in Memphis and Nashville -- could make a small claim to both labels. To millions of '50s teens, at least, they offered salvation from a increasingly staid world of modern kitchen appliances and sock hops. Culminating with the nationwide fame of Alan Freed and given a major blow by his subsequent indictment during the payola scandal, early DJ culture produced a wealth of fast talking and often goofy radio personalities who introduced the country to Elvis, Chuck Berry, and Little Richard. For listeners equally enthralled by both the vintage DJs in-between-song patter and the music of the era, Increase Records has put together several volumes spotlighting major-market DJs on the air from 1955-1970. This third installment, Cruisin' 1957, features WIBG's Joe Niagara from Philadelphia. He's half hipster, half car salesman, mixing praise for Berry's "School Days" with spots pushing Muntz-brand TV's. All the cuts are classics: the Coasters' "Searchin'," Larry Williams' "Bony Maronie," the Spaniels' "Goodnight Sweetheart," Jimmie Rodgers' "Honeycomb," and Bill Justis' "Raunchy." Sure, some of the music suffers from overexposure or sounds a bit too kitschy for its own good, but with Joe Niagara making it all seem so dramatic and fun with his jingles, station I.D.s, and sundry car ads, who's taking notes? ~ Stephen Cook