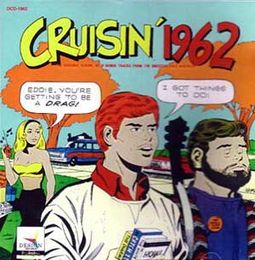 Personnel: Dee Dee Ford, Dion, Don & Juan, Don Gardner , Gene Chandler, The Sensations, The Shirelles, Barbara George, Barbara Lynn, Brian Hyland, Bruce Channel (vocals).
Liner Note Author: Jerry Hopkins.
Spanning over 15 years of rock & roll radio, the many volumes in the Cruisin' series spotlight major-market DJs spinning discs, cueing reverb-friendly commercial spots, and conveying all the latest by way of the occasional news flash -- not to mention all the hip and wigged out banter they intone in between songs. For this 1962 installment, Dallas radio man Russ "Weird Beard" Knight is at the mic, guiding his fans through another seven-to-midnight shift. Knight's show is the probably the most slick and kaleidoscopic of the Cruisin' bunch, as evidenced by a dramatic narrative flow punctuated by an E.S.P. skills promo, a Gillette ad, Southern segregation news headlines, a space-race fantasy short, and a Chrysler car commercial. This is not to forget the fine music included as well: along with such well-worn classics as Gene Chandler's "Duke of Earl," Dion's "The Wanderer," and Little Eva's "Locomotion," there's almost-forgotten classics like Johnny Dee & the Starliters' "Peppermint Twist," the Sensations' "Let Me In," and Shelley Fabares' "Johnny Angel." And in case you still feel less than nostalgic after all this, the vocoder-enhanced singing of the station ID should do the trick. ~ Stephen Cook