Rolling Stone: Ranked #60 in Rolling Stone's "500 Greatest Albums Of All Time" - "Sly and the Family Stone created a musical utopia..." 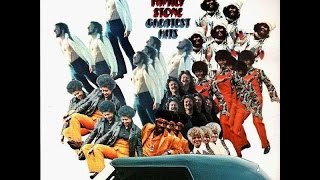 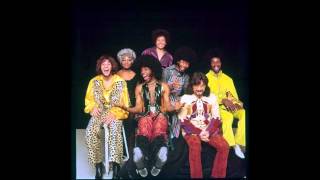 Includes liner notes by Morgan Ames.
This album was released in 1970. It was Sly & The Family Stone's fifth album, and the first to feature "Thank You (Falettinme Be Mice Elf Agin)"/"Everybody Is A Star", which was a #1 single. After James Brown, Sly Stone led the most influential funk band of his generation.
Sly & the Family Stone: Jerry Martini (saxophone); Rosie Stone (keyboards); Larry Graham (bass guitar); Freddie Stone, Greg Errico, Sylvester "Sly Stone" Stewart, Cynthia Robinson.
Personnel: Sylvester "Sly Stone" Stewart (vocals, guitar, keyboards); Freddie Stone (vocals, guitar); Cynthia Robinson (trumpet); Greg Errico (drums).
Liner Note Author: Morgan Ames.
Recording information: 1967-1969.
Photographers: Stephen Paley; Murray Neitlich; Bob Gruen; Yoram Kahana; Sandy Speiser.
As anthology albums go, this one is practically an embarrassment of riches, showcasing as it does some of the most innovative music of '60s. Granted, Sly had other hits after this best-of was cobbled together by a record company anxious about his slow progress in the studio, but what's here is, as they say, choice.
The impact these songs had on '70s funk (and beyond--just ask Prince) is all but incalculable, but Sly's musical vision was far more all encompassing than that might suggest. A song like "Everyday People" could be danceable, magisterially beautiful, and lyrically uplifting all at the same time (and, it should be added, eternally fresh-sounding).