Down Beat: 3.5 stars out of 5 - "...Mysterious Oriental mood music....suggesting a true affinity with a world that has come to symbolize a solid bastion for jazz..." 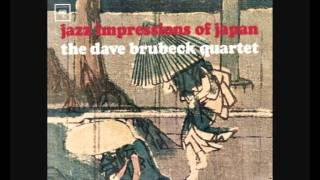 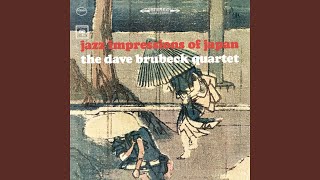 Dave Brubeck Quartet: Dave Brubeck (piano); Paul Desmond (alto saxophone); Eugene Wright (bass); Joe Morello (drums).
Reissue producers: Didier C. Deutsch, Darcy M. Proper, Russell Gloyd.
Recorded at CBS Studios, New York, New York between January 30, 1960 and June 17, 1964. Originally released on Columbia (9012). Includes liner notes by Dave Brubeck.
All tracks have been digitally remastered.
Thirteen years into their tenure, the Dave Brubeck Quartet was still able to mine the creative vein for new means of expression. Despite the hits and popularity on college campuses, or perhaps because of it, Brubeck, Paul Desmond, Eugene Wright, and Joe Morello composed a restless band with a distinctive sound. These eight tracks, all based on a tour of Japan the year before, were, in a sense, Brubeck fulfilling a dictum from his teacher, the French composer Darius Milhaud, who exhorted him to "travel the world and keep your ears open." The sketches Brubeck and Desmond created all invoke the East, particularly the folk melodies of Japan directly, while still managing to use the Debussian impressionistic approach to jazz that kept them riding the charts and creating a body of music that, while playing into the exotica craze of the moment, was still jazz composed and played with integrity. The gorgeous modal blues that uses Eastern scale whole tones with Western harmonic notions -- chromatically -- that comprise the melody and solo frameworks for Desmond in "Fujiyama" are a beautiful contrast to the relatively straight-ahead ballad style featured on "Zen Is When," with its 4/4 time sling rhythm and simple melody -- extrapolated by Brubeck in purely Japanese whole tone scale on the harmony. Also, the shimmer and whisper of "The City Is Crying," where Desmond's solo is one of the most beautiful of his career, using arpeggios as half tones to reach down into the middle of his horn's register and play harmonically a counterpoint that is as painterly as it is poignant. On "Osaka Blues," Brubeck once again reaches for an oriental scale to play a modal blues … la Miles Davis with Wynton Kelly; Desmond responds by playing straight post-bop Bluesology with even a squeak or two in his solo. In all, Jazz Impressions of Japan is one of the great forgotten Brubeck records. Its sweetness is tempered with musical adventure and the improvisational experience only a band that had been together 13 years could provide. It's truly wonderful. ~ Thom Jurek