She Launched A River of BLOOD 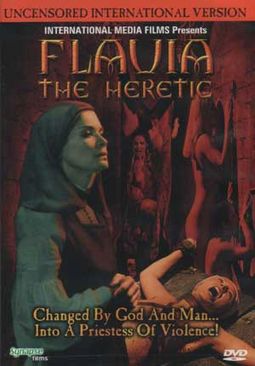 Florinda Bolkan stars as Flavia, a woman forced to live the life of a nun by her demanding father. After witnessing injustices and questioning her own faith, she flees the convent in search of a better life. Her taste of freedom beyond the confines of the convent walls is cut short and she is soon recaptured, tortured and whipped for her defiance of the church. Befriending Sister Agatha, who shares her hatred of men, Flavia plots a rebellion. A bloody, violent confrontation ensues as she leads Muslim warriors to attack, rape and murder her friends in the convent. From a confused nun questioning her faith, to a violent dominating leader, Flavia's taste of absolute power comes at a dear price. Call FLAVIA THE HERETIC what you will. A bold statement on feminism or just one of the goriest exploitation films ever made. Synapse Films is proud to present FLAVIA THE HERETIC in its complete, uncut uncensored English language version for the first time in the U.S. FLAVIA THE HERETIC is "nunsploitation" at its finest. and a must-have for any fans of 1970s Euro-sleaze!

This 1970's, Euro-sleaze, cult favorite tells the tale of an unwilling young woman called Flavia (Florinda Bolkan) who is forced by her very strict father into a convent to become a nun. Experiencing hurtful injustices and wrongdoings leads Flavia to begin questioning her faith and planning an escape to a better life. Once free, she is captured, tortured, and flogged for disobeying orders. Back in the convent, Flavia finds a friend in Sister Agatha and the two begin to plot revenge on the church in the worst way imaginable. They soon summon the help of Muslim warriors who eventually carry out some of the most violent and horrific murders known to organized religion. Flavia's revenge, however, does not come without a price. FLAVIA THE HERETIC is well-known for it's statement on feminism as well as the innovative special effects. The haunting score was written by award-winning composer Nicola Piovani.