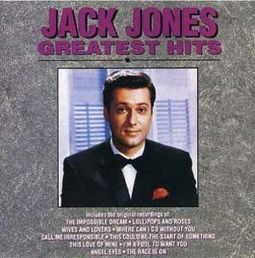 Through the fog of rock and Motown, Jack Jones emerges bearing the torch of traditional pop singing, having received it from the likes of Ella Fitzgerald, Mel Torme, Judy Garland, and Frank Sinatra. These 10 hits give us a sampling of Jones' able way with a ballad.
The tender "Lollipops And Roses" is given an ethereal orchestration, gliding beneath Jack's forceful but relaxed singing like the current under a flying carpet. His vocal splendor is equally appreciable in other genres. With its honky-tonk country music, "The Race Is On" benefits from Jack's sharp and no-frills interpretation. The upbeat side of Jack Jones finds outlet in the marital advisory "Wives And Lovers." The spry melody and tempo suit his bright baritone perfectly. The versatile singer is equally at home with the blues-like spirit and moody pace of "Angel Eyes."

60%off
Claudine Longet
We've Only Just Begun / Let's Spend The Night Together (CD-R)
$5.98 on Sale
Add to Cart