The Curse of Frankenstein / Taste the Blood of Dracula R 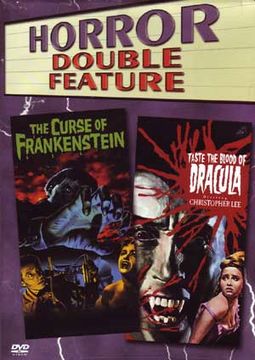 Disc 1/Side B: TASTE THE BLOOD OF DRACULA

The Curse of Frankenstein (1957, 83 Minutes): You can't keep a good monster down - a point proven in The Curse of Frankenstein, the film via which Hammer Studios revived Gothic horror in an era dominated by sci-fi scarefests. In the first of many fright-film collaborations, Christopher Lee and Peter Cushing star in a tale about the family whose grasp of life's secret has monstrous consequences.

THE CURSE OF FRANKENSTEIN: Young Victor Frankenstein, son of the famous scientist, sets out to recreate his father's diabolical experiment. The baron becomes obsessed and develops a homicidal nature resulting in the deaths of many townsfolk leading up to a climactic confrontation with the monster and his maker.

TASTE THE BLOOD OF DRACULA: The infamous count seeks to avenge the death of a valued friend.

19%off
Frankenstein Must Be Destroyed
$12.10 Super Savings
Add to Cart

Dracula: The Love Story to Die For / Vampire Raiders
$19
Add to Cart

18%off
Santo In the Wax Museum / Santo In the Treasure of Dracula
$16.40 Super Savings
Add to Cart