They make the fighting sinful west blaze into action before your eyes! 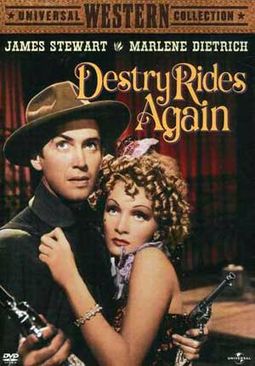 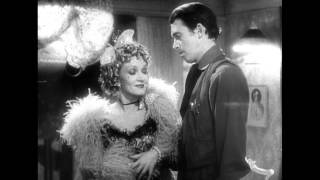 "Thar's gold in them hills."
- A Cowhand to Frenchy (Marlene Dietrich)

As Destry, a mild-mannered deputy who doesn't like guns, Stewart is called to restore order to the hopelessly corrupt frontier town of Bottleneck. Though reluctant to undertake such an enormous task, he's soon roped into action after meeting the seductive Frenchy (Dietrich), an alluring saloon girl who belts out unforgettable show-stoppers like "The Boys in the Back Room," while winning the hero's heart. Packed with unforgettable performances, snappy dialogue and rousing tunes, Destry Rides Again is a true fan favorite which set the standard for all western comedies to come.

DESTRY RIDES AGAIN will forever be remembered for Marlene Dietrich's performance as Frenchy, a crooked saloon waitress with a heart of gold. Her rendition of "See What the Boys in the Back Room Will Have" is one of the highlights of her career. But DESTRY RIDES AGAIN has much more to offer than just Dietrich's performance. This hilarious satire carries Jimmy Stewart in the lead as Tom Destry, a supposedly tough law enforcement man who doesn't like guns. Stewart's comic touches are brilliant as he eagerly gives out educational anecdotes anytime an opportunity affords itself. The plot concerns the efforts of a saloon owner and a corrupt Mayor to rob the local cowpokes blind. Frenchy's on the payroll of the bad guys, but when sparks fly between her and Destry, her loyalty becomes a deciding factor in whether it's Destry or the bad guys who will ride off into the sunset.

18%off
Support Your Local Sheriff
$16.40 Super Savings
Add to Cart

The Dude Ranger
$10
Add to Cart

Customer Rating:
Based on 16586 ratings.


This is one of the best westerns ever made. It has everything from comedy to a mob scene. Marlene sings the classic,"See What The Boys In The Back Room Will Have". There is a brawl between Marlene and Calahan's wife that is one of the highlights of the movie. The best scene in the movie is in the bar. There is a crowd on hand and Marlene is angry at Destry and points a gun at him. The crowd quickly gets out of the way. Then she starts throwing chairs, glassware at him, but soon is exhausted, but feels she has won. She asks, "Who will buy me a drink?", and goes to the bar. There she sees her dress is soaked, her hair is a mess, and she yells and runs out of the bar. The finale has the town in a mob scene. Jimmy Stewart is the hero and Brian Aherne is the villain. There are guns going off, and the women are seen marching down the street to the bar, and then chaos ensues. Aherne is upstairs while Marlene and Jimmy are on the main floor among the fighting. Marlene looks up and sees Aherne with a gun and she makes her way to Jimmy, but just as she gets there, Aherne fires the gun and kills Marlene instead. It is an action packed western from start to finish. They don't make them like this anymore. This movie is a must have for your video collection.