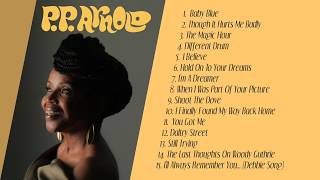 Following the release of the shelved 1971 recording The Turning Tide by two years, P.P. Arnold's fourth studio album itself is archival in a sense, despite its title. In the late '90s, after the beloved cult soul singer helped Ocean Colour Scene take "It's a Beautiful Thing" to number 12 on the U.K. pop chart, she and the band's Steve Cradock worked on solo recordings. Only an update of Michael Nesmith's "Different Drum," based on the Stone Poneys' hit version from 1967, was issued. The rest was left unfinished until the mid-2010s -- before The Turning Tide was finally freed -- when Cradock rediscovered the material and was enthused enough to contact Arnold about finishing what they started. New Adventures spiffs up and expands the project to double-LP length. It plays to Arnold's strength as a charismatic and captivating vocalist most comfortable with lavish fusions of soul and pop that evoke the late '60s and early '70s. In addition to his production, arrangements, and multi-instrumental support, Cradock brings a few songs, such as the kaleidoscopic opener "Baby Blue" and the belter "Still Trying." Fellow champion and collaborator Paul Weller chips in with a couple of his own, including "Shoot the Dove," originally a Heavy Soul-era B-side. It's surpassed here with Arnold's voice, still charming and sweet with some grain to it, a natural fit. Other high points include a retouched "Different Drum" and a winding Arnold/Cradock-written ballad, "I Finally Found My Way Back Home," that would perfectly end just about any other album. Rather than close with it, New Adventures takes a couple striking turns on side four with a bad-ass recitation of Bob Dylan's "Last Thoughts on Woody Guthrie" and a poignant tribute to Arnold's eldest daughter. The subject of "I'll Always Remember You... (Debbie's Song)" died in a car accident over four decades ago, but the years since the tragedy haven't lessened her mother's passion. ~ Andy Kellman