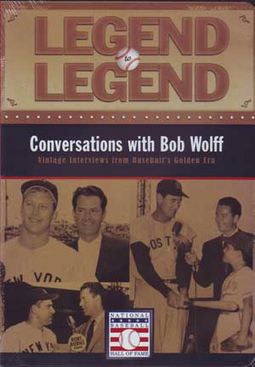 Although his nearly six-decade career spans the worlds of football, basketball, hockey, and boxing, legendary sports broadcaster Bob Wolff is most associated with the golden age of baseball for his years of announcing for the Washington Senators in the 1950s. During that time, Wolf was able to interview many of the era's greatest players in a trademark style that adopted the warm and humorous air of a conversation between friends (which it often was). LEGEND TO LEGEND: CONVERSATIONS WITH BOB WOLF presents a selection of Wolf's vintage interviews with such immortal greats as Ted Williams, Mickey Mantle, Whitey Ford, Yogi Berra, Casey Stengel, and many others for a nostalgic and rarely seen slice of baseball and broadcasting history.