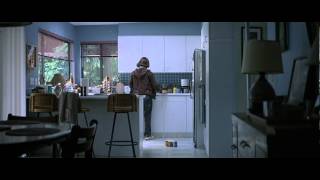 Music-video director Mike Mills's feature-length debut, THUMBSUCKER, is an offbeat, unique film about the trials and tribulations of a relatively normal family living in Oregon. The black comedy stars Lou Pucci as Justin Cobb, a 17-year-old who still sucks his thumb, infuriating his tough father, Mike (Vincent D'Onofrio), a high-school football star who never made it to the pros because of a knee injury. Justin's mother, Audrey (Tilda Swinton), is a nurse who is developing an odd crush on TV actor Matt Schramm (Benjamin Bratt). Meanwhile, Justin becomes more interested in Rebecca (Kelli Garner) than arguing with his peers as a member of Mr. Geary's (Vince Vaughn) debate team. To rid Justin of his thumbsucking habit--as well as other weird things that begin happening after his Zen-like orthodontist, Perry Lyman (Keanu Reeves), hypnotizes him--he is put on medication to combat attention deficit disorder, which further complicates his life and his relationships with friends, family, and teachers. Pucci is magnificent in the title role, capturing just the right nuances in his portrayal of a troubled teenager. The rest of the cast is excellent as well, especially D'Onofrio as a father unable to show his emotions, Vaughn as a cool teacher, and Reeves as a wacked-out dentist. The Polyphonic Spree composed songs for the film, which is based on a novel by Walter Kirn.