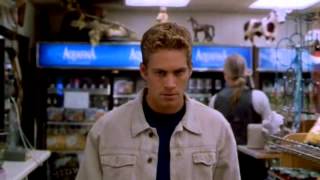 Director John Dahl knows his way around a thriller as few contemporary filmmakers do. He revitalized the film noir with his darkly witty films, RED ROCK WEST and THE LAST SEDUCTION. With JOY RIDE, Dahl streamlines the plot and ratchets up the tension. Two brothers, Lewis (Paul Walker) and Fuller (Steve Zahn) are driving home cross-country. Fuller bullies Lewis into using the CB radio ("Prehistoric internet," Fuller calls it) to play a mean-spirited practical joke on a trucker, and it backfires horribly. The psychotic trucker comes after them, but they get away. Foolishly thinking they're out of danger, they pick up Venna (Leelee Sobieski), the girl Lewis has been pining for, on the way home. The mysterious trucker, who they know only by his CB handle, "Rusty Nail," goes further than they could ever imagine to exact his revenge. Zahn is pitch-perfect here, capturing both Fuller's charm and his stupid recklessness. Dahl builds the suspense beautifully, creating a real sense of being out on the highway in the middle of nowhere. The script, by Clay Tarver and J.J. Abrams, brings three strong characters to life with sharp, funny dialogue, fleshing out the bare bones of the plot.