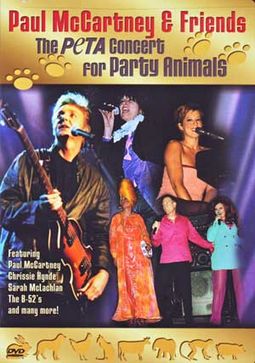 Get email alerts for Paul McCartney
9 ratings
Currently Out of Stock: We'll get more as soon as possible
Notify Me When Available
Add to Wishlist
Format:  DVD
item number:  XTX 02141D
91% recommend us!

The PETA organization is close to Paul McCartney's heart, and he has spent a great deal of time campaigning, alongside his late wife Linda, for their cause, and for animal rights in general. Amusingly titled THE PETA CONCERT FOR PARTY ANIMALS, the former Beatle is joined here by a host of friends as he works through a selection of songs, while other groups such as the B52's, Chrissie Hynde from the Pretenders, and Sarah McLachlan get up on stage to play some songs of their own. Meanwhile, stars from non-muscial backgrounds also get in on the action, as Pamela Anderson, Alec Baldwin, Jamie Lee Curtis, Ellen DeGeneres, and many others all unite to help out.

A MusiCares Tribute to Paul McCartney
$16.30
Add to Cart

A MusiCares Tribute to Paul McCartney (Blu-ray)
$20.80
Add to Cart