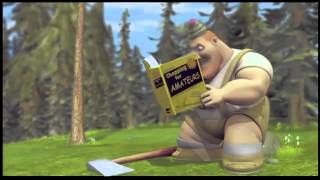 This new spin on an old fable is from first-time director Cory Edwards, who also co-wrote the story and screenplay. Virtually everyone knows the story of Little Red Riding Hood, the young girl who brings a basketful of goodies to her Granny's house only to discover the Big Bad Wolf impersonating her beloved grandmother. In this digitally animated version of the classic tale, a bolder Red (Anne Hathaway) is a delivery girl for her Granny's sweets shop. The Big Bad Wolf (Patrick Warburton) is there as well, but this time he's not exactly a threat. As for Granny (Glenn Close), she's hardly frail and sickly; she has a big secret that she's keeping from everyone--including Red. Finally, there's the Woodsman (Jim Belushi), a struggling actor who drives a schnitzel-on-a-stick truck by day.

When this foursome collides, they become suspects in an investigation by Detective Flippers (David Ogden Stiers), Chief Grizzly (Xzibit) and Detective Bill Stork (Anthony Anderson). The police are also trying to track down the Goody Bandit, who is stealing all of the best recipes from the forest's sweet shops. By examining each character's story, Flippers is sure he can figure out not only what happened at Granny's that day, but also the identity of the Goody Bandit. Through flashbacks punctuated by original songs, Red, Wolf, Woodsman, and Granny each relay to Flippers their outrageous adventures from that day, from extreme skiing to hang gliding to falling out of a cable car to log rolling. Soon they all have an idea who the thief is. But can they stop the Goody Bandit from wreaking more havoc and monopolizing the sweets industry' Andy Dick also stars as the voice of Boingo.

Happily N'Ever After
$10
Add to Cart