Things are about to get hairy. 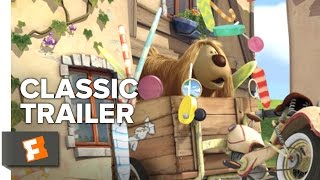 The origins of the characters in DOOGAL stretch back to 1964 and a TV program called THE MAGIC ROUNDABOUT (or "Le Manège Enchanté" as its French creator Serge Danot called it). The show became a popular staple on British television, and this full-length movie is the first attempt to acquaint American audiences with Danot's magical world.

Zeebad (voiced by THE DAILY SHOW's Jon Stewart) is a recently escaped convict whose powers as a sorcerer are known throughout the land. While fleeing from prison, the embittered Zeebad decides to capture some mystical diamonds with the power to freeze the sun. Zeebad's devious dream is to freeze the entire globe as an act of revenge on those who imprisoned him. But he doesn't bank on the resilient forces of heroic canine Doogal (Daniel Tay) and his friends, a snail named Brian (William H. Macy), a hippie-ish rabbit called Dylan (Jimmy Fallon), and a loveable pink cow by the name of Ermintrude (Whoopi Goldberg). Together, they venture across the world in a desperate bid to find the ancient stones before the dastardly Zeebad gets his hands on them. Doogal and his friends scatter a few amusing references to popular culture into the plot as the story unfolds, and the animation is rendered in a style instantly familiar to fans of movies such as FINDING NEMO and HOODWINKED. Fans of the original television show who are looking for a fond, nostalgic experience won't find much to remind them of Danot's creation in DOOGAL, which is a fast-paced action romp aimed at a young audience. But for a new generation of fans this is a great way to get acquainted with a bunch of loveable characters who passed their 40th birthday on completion of the film.

25%off
Max Fleischer's Hunky & Spunky: The Complete Collection
$5.95 on Sale
Add to Cart

25%off
Ub Iwerks: The ComiColor Cartoon Collection
$5.95 on Sale
Add to Cart