The Greatest High Adventure Ever Filmed! 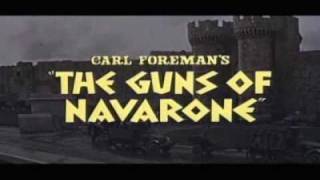 One of the great war movies of all time, with an all star cast, and a gripping plot--based on the Alistair MacLean novel. A commando team is sent to a Greek Island to destroy the giant guns of World War II Germany which are controlling a strategic channel in the Aegean Sea. This was a groundbreaker in the Special Effects department, too. Academy Award Nominations: 7, including Best Picture, Best Director, Best (Adapted) Screenplay. Academy Awards: Best Special Effects.

A specialized commando team is organized in 1943, during WWII, to sabotage and put out of commission the Axis firepower on the mountainous Greek island of Navarone in the Aegean Sea.