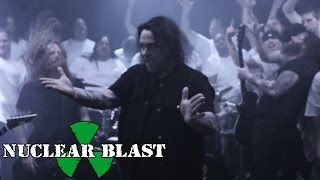 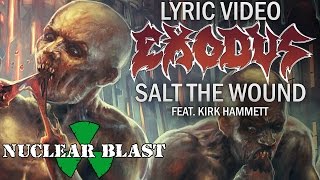 The veteran San Francisco Bay Area thrash metal legends' tenth studio album is also their first long-layer to feature the singing/screaming talents of Steve "Zetro" Souza since 2004's Tempo of the Damned -- Rob Dukes, who handled vocal duties on the band's four prior outings, split with the group in the summer of 2014. Band and ex/current/deceased lead singer acrimony aside, the 11- track Blood In, Blood Out mostly crushes it, offering up a pulverizing set of textbook thrash-induced mayhem that somehow manages to sound both classic and vital. The band tosses a red herring into the pit with the electro-stomp intro to opener "Black 13," but it doesn't take long for guitarists Gary Holt and Lee Altus to unleash a barrage of staccato riffage that, like a perfectly calculated headshot, effectively drenches the listener in assorted bits of viscera. Elsewhere, Metallica's Kirk Hammet returns to the fold for a guest spot on the particularly crunchy "Salt the Wound," the relentless "Collateral Damage" arrives via a malevolently dissonant descending run that eventually morphs into the scaly backbone of the song, and the insidious title track, with its pit-antagonizing shout-out to late vocalist Paul Baloff ("We wrote the book so you better know the plot/new breed, old creed, let's see what you brought"), all succeed via their obvious disdain for whether or not anybody actually gives a sh*t. For all its excess (some tracks definitely overstay their welcome), Blood In, Blood Out, much like Cannibal Corpse's 2014 offering Skeletal Domain, sounds remarkably dialed-in for a band so long in the tooth, and while it doesn't break any new ground for the stalwart rockers, it certainly does little to tarnish their reputation as thrash royalty. ~ James Christopher Monger

Testament
Brotherhood of the Snake
$15.40
Add to Cart

Exodus
Exhibit B: The Human Condition
$26.80
Add to Cart

29%off
Megadeth
Countdown to Extinction
$8.49 on Sale
Add to Cart

Hatesphere
Ballet of The Brute
$8.70
Add to Cart