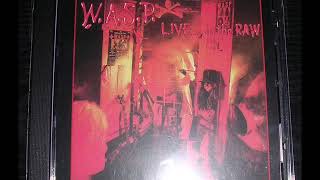 W.A.S.P. includes: Blackie Lawless (vocals, bass); Chris Holmes (guitar).
Recorded live at the Long Beach Arena, Long Beach, California.
Music critics have always pointed out the similarities between theatrical rockers Kiss and W.A.S.P. -- Blackie Lawless' and Gene Simmons' blood spewing, makeup and costumes, high-decibel rock, and so on. (Ace Frehley even produced W.A.S.P.'s first demo!) Kiss used the live album format for their big commercial breakthrough, 1975's classic Alive!, and W.A.S.P. hoped the same would happen for them with 1987's Live...In the Raw. While it didn't work out that way, it served as a worthwhile document of the band' s live show -- but the biggest problem is that W.A.S.P. concerts always relied mainly on visuals. Still, the band offers heavy versions of such fan favorites as "L.O.V.E. Machine," "Wild Child," "I Wanna Be Somebody," "Blind in Texas," "I Don't Need No Doctor," and "Sleeping (In the Fire)." Also included is a live version of a previously unreleased original, "Harder Faster," as well as the soundtrack-only studio cut "Scream Until You Like It" (from Ghoulies II). ~ Greg Prato