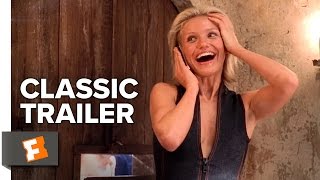 Based on the babe-a-licious show from the 1970s, CHARLIE'S ANGELS is a defiantly goofy action movie featuring plenty of comedy and a strong sense of girl power. Three talented young women work for the mysterious Charles Townsend: Natalie (Cameron Diaz), the bubbly blond science expert; Dylan (Drew Barrymore), the rebellious tomboy; and Alex (Lucy Liu), the tough Angel who has trouble telling her boyfriend that she's a highly skilled secret agent. The Angels are assigned to locate Eric Knox (Sam Rockwell), a kidnapped computer expert whose new software could threaten global security if it were to fall into the wrong hands. The women go undercover to investigate this devious tycoon and are faced with double crosses, explosions, and the mysterious Thin Man. From the acclaimed music-video director McG (Joseph McGinty), CHARLIE'S ANGELS wastes little time on plot, instead presenting audiences with a series of spectacular MATRIX-style fight sequences, car chases, and stunts. Diaz, Barrymore, and Liu as the three Angels give terrific performances worthy of a new breed of female action hero, kicking major butt while remaining lovable and sexy. The movie also stars Bill Murray as the Angels' mentor, Bosley, and John Forsythe as the voice of Charlie.

They're beautiful, they're brillant, and they work for Charlie. In a smart, sexy update of the 70'sTV show from celebrated music video director McG. CHARLIE'S ANGELS revolves around three female detectives - Natalie (Cameron Diaz, Golden Globe(r) nominee for THERE'S SOMETHING ABOUT MARY) the bookworm, Dylan (NEVER BEEN KISSED's Drew Barrymore) the tough girl and Alex ("Ally McBeal's" Lucy Liu) theclass-act - as intelligent and multi-talented as they are ravishingly gorgeous and utterly disarming. What can be done when Eric Knox, a soon-to-be billionaire, is kidnapped for his dollars' Under the sure hand of their suave playboy boss, notorious for his clever ways of avoiding face-to-face meetings with his employees, the Angels use feminine charm, high-tech gadgets and hand-to-hand combat tosave themselves, Charlie and thousands of innocent people.

16%off
Josie and the Pussycats
$8.40 Super Savings
Add to Cart

30%off
Charlie's Angels: Music From The Motion Picture [Australian...
$6.98 on Sale
Add to Cart