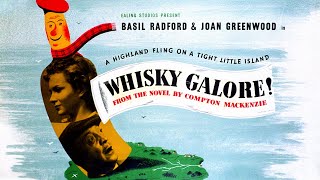 WHISKEY GALORE! is Scottish director Alexander Mackendrick's first film and first contribution to the popular, distinctly British Ealing Studio comedies of the 1940s and 1950s (PASSPORT TO PIMLICO, KIND HEARTS AND CORONETS). On the remote Outer Hebrides island of Todday, the inhabitants are happily immune to WWII until their ration of beloved whisky runs dry. Gloom settles over the island with this fate worse than "war and pestilence." Nonetheless, Sergeant Odd (Bruce Seton) asks to marry his sweetheart, Peggy (Joan Greenwood), while timid schoolteacher George (Gordon Jackson) requests her sister Catriona's (Gabrielle Blunt) hand. The men face opposition from the girls' father, Joseph Macroon (Wylie Watson), a crotchety, vague man preoccupied with the absent "water of life." Fate intervenes one foggy night when the S.S. Cabinet Minister, a cargo ship laden with 50,000 cases of whiskey runs aground off Todday. The elated male islanders plan to raid the ship, but must contend with dimwitted, overly dutiful Captain Waggett (Basil Radford) of the Home Guard. With a hilarious series of thwarted plans, car chases, and devious uses of guard equipment, the islanders vie to evade Waggett and his excise g-men in this spirited, tongue-in-cheek winner.

During World War II, the small Scottish island of Todday is suffering from the most terrible thing they believe could've happened; a wartime shortage of whisky! Fortunately for the islanders, a ship carrying the precious liquid is wrecked on a reef, and i

In WHISKEY GALORE!, the residents of a small Scottish isle find their insufficient liquor supplies suddenly replenished when a ship carrying 50,000 cases of the much desired beverage flounders off their coast. The sudden and unexpected liquid windfall creates a comic atmosphere.

Passport to Pimlico
$19
Add to Cart