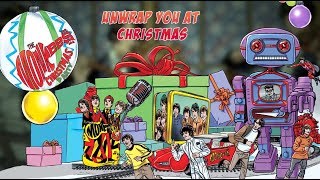 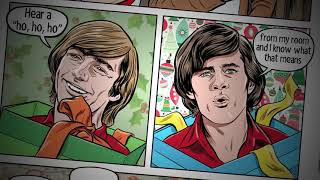 The Monkees - What Would Santa Do (Official Lyric Video) (Music Video)

Audio Mixer: Adam Schlesinger.
Recording information: Beatland Tours, Atwater Village, CA; Institute for the Musical Arts, Goshen, Massachusetts; Lucy's Meat Market, Los Angeles, CA; Omelette Station, NYC; The Doghouse Studio, Los Angeles, CA.
It may be hard to believe, but 2018's Christmas Party is the first Christmas record the Monkees ever released. Chalk this up to the band breaking up in 1970, long before Christmas records were common among rockers, but 2018 is also the right time for the Monkees to deliver a Christmas record because the group figured out how to make the right kind of modern Monkees album with 2016's Good Times! A clever combination of made-to-order originals and gussied-up old recordings, the Adam Schlesinger-produced Good Times! managed to feel simultaneously fresh and familiar, a combination that lends itself well to holiday albums. Christmas Party contains many of the same collaborators as Good Times! -- Schlesinger returns as producer and he co-wrote "House of Broken Gingerbread" with Michael Chabon, while Andy Partridge, Rivers Cuomo, and Peter Buck & Scott McCaughey all deliver new songs -- and it has the same feel, blurring the lines between the past and present so thoroughly that it no longer matters to discover where they're separated. Schlesinger's presence is also a tell that Christmas Party leans into power pop: the back half contains versions of Alex Chilton's "Jesus Christ," Roy Wood's "I Wish It Could Be Christmas Every Day," and Paul McCartney's "Wonderful Christmastime," each sounding at home in this smartly self-referential version of the Monkees. If the two Davy Jones songs aren't as successful as those on Good Times!, it's only because the tracks date from somewhere after the '60s, so he's not as boyish as he sounded on the last record. Then again, both Mike Nesmith and Peter Tork carry their ages well, helping to give this a nice sentimental undercurrent, while Micky Dolenz remains something of a small wonder. All these years later, he sounds cheerful and committed singing these songs, acting out the Partridge, Cuomo, and Buck & McCaughey songs with gusto, and his enthusiasm is infectious. He's having a great time, as is everybody else making the record, and it's hard for the listener at home not to smile too. ~ Stephen Thomas Erlewine

The Monkees
Looking for the Good Times: Examining the Monkees' Songs,...
$23.98 on Sale
Add to Cart