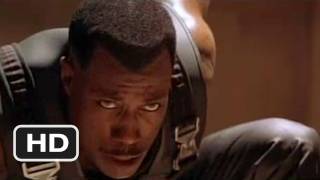 "Tonight, the age of man comes to an end."
- Deacon Frost (Stephen Dorff)

A local Indian tribe has been staging deadly raids on wagon trains traveling along the Arizona frontier trail. Centered around the town of Preston, this uncharacteristic violence is becoming a serious problem, leaving lawmen Ken Maynard and Hoot Gibson to figure out who's really behind the killing and plundering. As luck would have it, notorious bandit Duke Dillon is set to serve out his prison sentence in Arizona. Hoot proposes that a more lenient sentence might convince him to point out those responsible for stirring up trouble with the Indians.

Ken Maynard and Hoot Gibson, two of the most famous cowboys from the 1920s and 1930s, both returned to the silver screen in 1943, teaming up as the Trailblazers. Maynard appeard in the first six of eight Trailblazers pictures produced by Monogram, with three of those also featuring Bob Steele.

Based on the comic book of the same name, BLADE (Snipes) is a half-mortal, half-immortal bent on avenging his mother's death and destined to rid the earth of a race of vampires. Meanwhile, the modern-day technologically advanced vamps he's targeted are in pursuit of his special blood type needed to summon an evil god who plays a key role in their plan to execute the human race. A dark action thriller from the director of DEATH MACHINE and the writer of THE CROW: CITY OF ANGELS and DARK CITY with plenty of blood and guts.