They're Back! No Strings Attached! 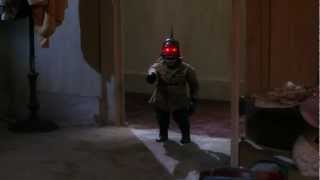 Those nasty little puppets are back to wreak more havoc and take care of some unfinished business. Joined by Torch, the newest member of the sinister troupe, the puppets exhume their beloved creator Toulon and gather the brain matter that keeps them alive. But the Puppet Master has a deadly plan of his own...

The puppets, led by newest member, the flamethrowing "Torch," exhume their beloved creator and go in search of the special fluid that keeps them alive, killing by hook, crook, blade and drill. But the Puppet Master has some murderous plans of his own.

Sequel to 1989s "The Puppet Master." The puppets are back to raise their long-gone master and another group of psychic researchers must battle the murderous dolls.

Puppet Master 5: The Final Chapter
$5.98 on Sale
Add to Cart