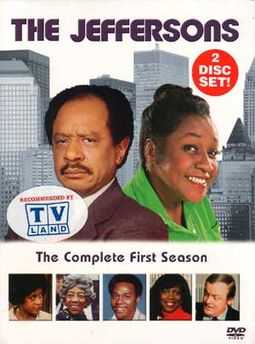 Beloved by fans and critics alike, the Emmy-winning CBS series, "The Jeffersons" is one of the most highly-rated and longest-running sitcoms in TV history, spanning a decade (1975-1985) with over 250 episodes during its remarkable run. A spin off from the seminal "All In The Family" series, the ground breaking "The Jeffersons" chronicled the rise of jive talking African American dry cleaner king George Jefferson (Emmy nominee Sherman Hemsley) and his sassy, no-nonsense wife Louise "Weezy" (Emmy winner Isabel Sanford), as they left their blue collar neighborhood, "movin' on up" to a luxury high rise apartment in New York City. In the process, the series changed the face of prime time TV comedy, smashing stereotypes while serving up outrageous laughs.

Created as a spin-off of Norman Lear's revolutionary sitcom ALL IN THE FAMILY, The Jeffersons ran on CBS-TV from 1975 to 1983, with a run of over 250 episodes. The program details the comic exploits of short-tempered African-American dry cleaning magnate George Jefferson (Sherman Hemsley) and his sassy wife Louise "Weezy" as they move from their blue-collar neighborhood to a deluxe apartment on Manhattan's Upper East Side. Adding to the fun is their back-talking maid Florence and a cast of colorful supporting characters. This 2-disc set contains all thirteen episodes from the ground breaking first season of this historic television comedy, which smashed stereotypes and ignored social conventions as it made audiences laugh.