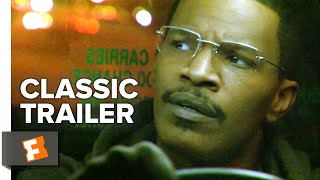 Jamie Foxx plays Max, a Los Angeles cab driver who has a pretty wild night in this thriller from Michael Mann (HEAT, THE INSIDER). First, Max picks up, flirts with, and gets the number of Annie (Jada Pinkett Smith), an attractive District attorney. Next, Vincent (Tom Cruise) climbs into his cab. He is a professional hit man who reserves Max for the night with a whole shopping list of victims he needs to visit. As the night moves forward and the body count rises, Max must wrestle with the question of how to do the right thing while staying alive. Gradually the two men bond in unlikely ways, as each learns survival mechanisms from the other, and it all doubles as a metaphor for morality vs. capitalism. Mark Ruffalo and Peter Berg play cops who eventually get on Max and Vincent's trail, leading to a spectacular action set piece inside a night club. Irma P. Hall (2004's THE LADYKILLERS) gets laughs as Max's hospitalized "momma," and Javier Bardem (BEFORE NIGHT FALLS) is a sinister drug lord. With a capable director like Mann at the wheel, this remains a smooth, enjoyable ride while also being fast, bumpy, and full of twists and turns. The streets of urban, nighttime Los Angeles--captured via a specially modified digital camera--never looked so beautiful or desolate. As typical of the director, the film is both artistic and action-packed; operatically over-the-top while never skimping on the little details.