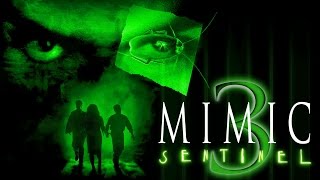 This second sequel to 1997's surprise hit begins after the cockroach plague of the first film devastated New York City. It follows Marvin, a young man whose various respiratory illnesses have forced him to live in a protected plastic encasing. Saddled with being known as the "bubble boy" as well as with a dysfunctional family, Marvin retreats to his own corner of the world, which is whatever he can see out of his bedroom window. However, when the flesh hungry mutated cockroaches from the first two films invade the neighborhood, Marvin must band together with his family to survive.

Mimic 3: Sentinel
The studio that thrilled you with the SCREAM, HELLRAISER, and CHILDREN OF THE CORN movies now delivers MIMIC 3: SENTINEL, the third and scariest entry in the unstoppably suspenseful and terrifying MIMIC legacy! When residents of his apartment building begin to disappear, Marvin comes to believe the unthinkable: the mutant breed of giant carnivorous insects that once plagued society are back and beginning to revisit their devastation! Though he's confined to his room due to a severe illness, Marvin must rally whatever support he can in order to exterminate these horrifying creatures before he ends up their next victim! Filled with all-new action and incredibly eye-popping special effects, this terror-filled thriller is a must-see for all fans of intense big-screen excitement!