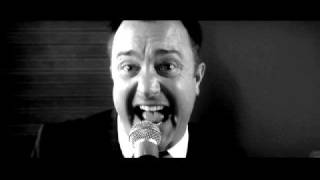 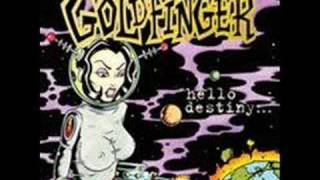 Alternative Press - p.128
3 stars out of 5 -- "[O]ne of the more important albums of the band's career.....Several of the tracks are decidedly upstroke and horn dependent; the band's refreshed, energized state is evident..."

Personnel: John Feldmann (vocals, guitar, keyboards, percussion); Charlie Paulson (vocals, guitar); Matt "Hippie" Appleton (vocals, horns, keyboards); Ray Cappo, Julian Feldmann, Dillon Teague Devoe, Ian Watkins , Alex Sanuate, Kelly Lemieux (vocals); Josephine Collective, Monique Powell, Bert McCracken (violin); Darrin Pfeiller (drums); Dean Butterworth (percussion).
Audio Mixer: John Feldmann.
Liner Note Author: Kevin Kjonaas.
Recording information: Foxy Studios, Bel Air, CA.
Photographers: Chuck Espinoza; Jess Baumung; Caio Salvagno; Amy Feldmann; Stephanie Wheeler; Ryan Bakerink; Quinn Allman.
Goldfinger discuss some serious issues on Hello Destiny... -- political activism, suicidal despair, breakups, war, religion, media exploitation, and political prisoners -- but do so with such bright, exuberant melodies that it's easy to overlook the lyrics. This makes the album work on two levels, engaging those who are there for the sociopolitical messages (albeit not particularly inspired or original ones) or just the fun and breezy nature of the tunes (albeit not particularly inspired or original ones). While the performances are solid on Hello Destiny..., there's nothing exceptional on display. Instead, John Feldmann, Kelly Lemieux, Charlie Paulson, and Darrin Pfeiffer sound settled in their groove. They're comfortable with each other and their influences, which allows the group to dabble in a myriad of styles here, including punk-pop, ska, and hardcore, while still maintaining a surprisingly smooth and consistent listen. Even the tough subjects dealt with in Feldmann's lyrics blend in nicely, thanks to his playful vocals. However, the bounce can't hide the more controversial items on offer (such as the manic "Handjobs for Jesus," which snidely takes both religious conservatives and George W. Bush to task, or "Free Kevin Kjonaas," an incessantly catchy number that advocates the release of an incarcerated animal rights activist), and that could make some listeners uneasy. Still, Hello Destiny... is at its heart a good-natured album, and it's refreshing to hear a band take on societal ills with hope instead of fury. It's by no means an essential album, but it's certainly a fun and educational one. ~ Katherine Fulton

The Mighty Mighty Bosstones
Don't Know How To Party
$26.90
Add to Cart