35K ratings
Currently Out of Stock: We'll get more as soon as possible
Notify Me When Available
Add to Wishlist
Format:  DVD
sku:  GX2V
91% recommend us! 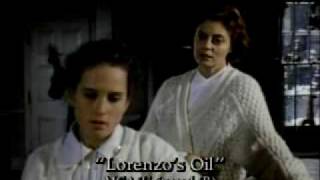 Based on a true 1985 story, "Lorenzo's Oil" chronicles a couple's search for a cure for their son's fatal disease. After diagnosing 5-year-old Lorenzo Odone's condition as an extremly rare degeneration of the nervous system known as Adrenoleukodystrophy (ALD), the doctors tell his parents that there is nothing that can be done, and that he has only two years to live. Refusing to accept the word of the medical establishment, the Odones begin researching ALD themselves. As her husband desperately seeks a cure, the boy's mother devotes herself to keeping her child alive with a single-minded fanaticism that alienates everyone around her, including, at times, her husband. Academy Award Nominations: 2, including Best (Original) Screenplay, Best Actress--Susan Sarandon.