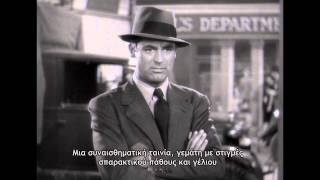 Julie Adams is leaving her husband Roger for good when she pauses to put an old record on the phonograph. While the tune "Penny Serenade" plays, she reminisces about their courtship and long marriage. On their honeymoon in Japan, Julie is almost killed in the great earthquake of 1923. Although she survives, she learns that she will never be able to bear children. The couple overcome tremendous obstacles as they try to adopt. With the help of a sympathetic adoption agency officer, a baby girl comes into their life. But unimaginable tragedy threatens to tear their happy home apart.

Screen legends Cary Grant and Irene Dunne headline a cast that features powerful supporting performances by Beulah Bondi and Edgar Buchanan. One of Hollywood's greatest directors, George Stevens won Academy Awards for A Place In The Sun (1951) and Shane (1953). The long list of towering classics helmed by the brilliant Stevens includes Gunga Din (1939), Woman Of The Year (1942), Giant (1956), The Diary Of Anne Frank (1959) and The Greatest Story Ever Told (1965).

In one of his rare departures from the realm of comedy, Cary Grant stars along with Irene Dunne in this sentimental tale about the marriage of Roger and Julie Adams.Told in flashbacks by Julie as she considers divorce, the film limns the couple's earlier years, when her reluctant journalist boyfriend finally proposes after being posted in Japan by the newspaper where he works. When Julie joins him after a three-month delay, she announces that she's pregnant, and is greatly concerned by Roger's rash spending habits. Shortly thereafter, their house is destroyed by an earthquake, which also ends Julie's pregancy. The couple returns to San Francisco only to find that Julie will no longer be able to bear children. Hoping to cheer his wife, Roger floats the idea of buying a small-town newspaper, but she remains inconsolable. He goes ahead with his plan to buy the paper, and the twosome rent an apartment above its offices. Meanwhile, their friend Applejack (Edgar Buchanan) begins gently coaxing the couple to adopt a child. Although the film is awash in sentimentality, it remains curiously compelling, which can be attributed to Stevens restrained direction, the skillful interweaving of comic material, and excellent work by the two leads.

As she considers divorce, housewife Julie Adams listens to records on the phonograph. The old songs bring back memories of the carefree early days of her marriage to Roger Adams, their decision to take over a small newspaper in the country, and the tragic events that have cast a shadow over their relationship.