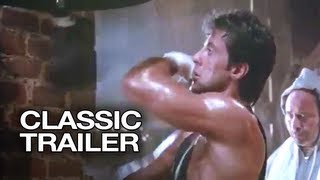 In John G. Avildsen's ROCKY V, times are different for boxing champion Rocky Balboa (Sylvester Stallone). A lifetime of taking shots has terminated his career, and a crooked accountant has left him bankrupt. In this final chapter of the ROCKY series, the Balboa family is forced to return to their gritty beginnings in the old neighborhood, attempting to start their lives anew. Life in Philadelphia means a lot of adjustment for the once-wealthy Balboa family--Adrian (Talia Shire) has to return to her job at the pet store, Rocky Jr. (Sage Stallone) struggles to endure a punishingly tough high school, and Rocky is forced to face that his championship career is finally over. Soon, though, Rocky returns to what he knows best--boxing. He becomes a manager for Tommy Gunn (Tommy Morrison), an up-and-coming boxer, teaching him all of the tricks of the trade. Inspired by the memory of his own trainer, Mickey (Burgess Meredith), Rocky is able to find glory in training. However, Tommy leaves his tutelage for George W. Duke (Richard Gant), a flashy Don King-like promoter, and Rocky's rage and sense of betrayal inspire him to fight one final grudge match. Young Tommy and Rocky duke it out in a bloody streetfight that recalls the brutal glory and hard-knocks finale of the original ROCKY.

ROCKY V finds Rocky Balboa's career waning as a result of the injuries he sustained at the hands of Ivan Drago. Unable to afford the lifestyle of his glory years, Rocky must move his family back to their old Philadelpia neighborhood and try to start over. However, the Italian Stallion's not down for the count...