CMJ: "...attacks with snarling psychobilly as its main weapon....the tracks maintain a sinister edge and a fascination with things that go bump in the night." 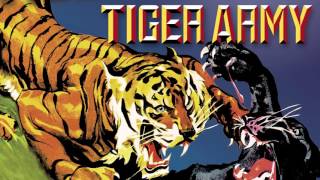 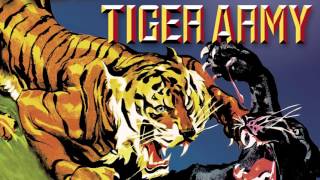 CMJ - 12/13/99, pp.21-2
"...attacks with snarling psychobilly as its main weapon....the tracks maintain a sinister edge and a fascination with things that go bump in the night."

Tiger Army: Nick 13 (vocals); Rob Peltier (upright bass); Adam Carson (drums).
Additional personnel: Davey Havok, Tim Armstrong, Eric Ozenne (vocals); Greg Leisz (pedal steel guitar); Thomas "TJ" Johnson (vibraphone); A.F.I. (background vocals).
Recorded at Art Of Ears, Hayward, California; Bloodclot Studios and 1014 North Vine Studios, Los Angeles, California in January 1999.
Personnel: Davey Havok, Tim Armstrong (vocals); Tom Johnson (vibraphone); Adam Carson (drums); AFI (background vocals).
Audio Mixer: Tom Johnson .
Recording information: 1014 North Vine Studios (01/1999); Art of Ears, CA (01/1999); Bloodclot Studios (01/1999).
In the late '70s and early '80s, it wasn't uncommon to find punk bands that were enamored of '50s and early '60s rock & roll. The Clash covered the Bobby Fuller Four's "I Fought the Law," and the Ramones were well aware of the contributions of pioneers like Chuck Berry, Buddy Holly, Little Richard, and Elvis Presley -- not to mention the girl groups, surf rockers and garage bands that emerged in the 1960s. Although Tiger Army wasn't formed until 1995, its work has recalled a time when punk bands showed their affection for early rock & roll. Released in 1999, this self-titled debut album is full of rockabilly influences -- the material is aggressive punk, but aggressive punk that owes a lot to rockabilly. And that's ironic because the Generation X-ers who comprise Tiger Army are young enough to be Jerry Lee Lewis' grandchildren. No one can accuse this band of lacking a sense of humor; many of the lyrics are funny in an irreverent, twisted sort of way. One of the things that Tiger Army finds amusing is the supernatural; "Devil Girl," "Trance," and "Werecat" (which is about a frightening beast that's half man and half cat) give the impression that singer Nick 13 (who wrote most of the songs) has spent a lot of time watching campy 1950s horror movies. Meanwhile, Tiger Army has some fun with country/Western themes on "Outlaw Heart," which uses a pedal steel guitar and almost sounds like a combination of punk and Marty Robbins. Tiger Army's first album falls short of remarkable, but the tunes are generally fun and catchy -- and Nick 13's irreverent sense of humor is a definite plus. ~ Alex Henderson