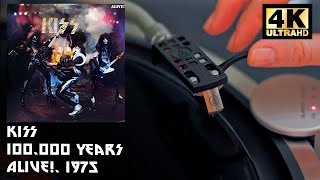 Kiss: Paul Stanley (vocals, guitar); Gene Simmons (vocals, bass); Peter Criss (vocals, drums); Ace Frehley (guitar, background vocals).
Includes liner notes by Paul Stanley, Ace Frehley, Gene Simmons, Peter Criss and Robert V. Conte.
Personnel: Ace Frehley, Paul Stanley (guitar); Peter Criss (drums).
Liner Note Author: Robert V. Conte.
Recording information: 03/1975-07/1975.
Photographer: Fin Costello.
When Kiss released the double album ALIVE in 1975, the purpose was to capture the spark and energy of their electrifying live shows. Although the spectacular lighting, Gene Simmons' blood-spitting and Ace Frehley's smoke-emitting guitar went unseen, the thunderous power with which Kiss performed every night came across easily.
Recorded during a 1975 tour, ALIVE may not have matched FRAMPTON COMES ALIVE in sales, but it put Kiss on the map in the eyes of the music-buying public. Songs such as "Deuce" and "Cold Gin" became staples for hard-core fans and "Rock and Roll All Nite" became an anthem for everyone else. Chock full of solid rock & roll hooks that pack a consistent punch, ALIVE established Ace Frehley as a certified guitar god. Not unlike the Velvet Underground, who've been credited with inspiring legions of fans to go out and start their own bands, Frehley was equally as influential to another generation. His fretwork on songs such as "Parasite" and "Let Me Go, Rock 'N' Roll" went just as far in getting thousands of adolescents to go out and pick up guitars.