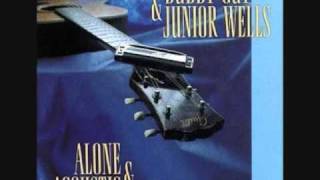 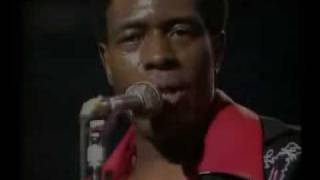 Personnel: Buddy Guy (vocals, guitar); Junior Wells (vocals, harmonica).
Recorded at Sysmo Studio on May 15, 1981 in Paris, France. Originally released as GOING BACK on the French label, Isabel Records (900.510). Includes liner notes by Bruce Iglauer.
This reissue includes 5 previously unreleased songs.
One of the best duos in the history of the blues, guitarist Buddy Guy and harmonica player Junior Wells made several recordings together over the decades, but this one is unique in their discography. Recorded in the midst of a 1981 European tour, Guy and Wells took a break from their backing musicians and amps to cut this spontaneous, all-acoustic set. The results stand in stark contrast to the hot-and-heavy Chicago blues the duo is known for. Instead, 1981's ALONE & ACOUSTIC is relaxed and personal, with an intimate, back-porch feel.
Guy switches between six- and 12-string guitars, and lays down rootsy acoustic rhythms for Wells's keening harmonica lines. The two share vocal duties, spinning through a handful of originals (including Guy's "Give Me My Coat and Shoes" and Wells's "Wrong Doing Woman"), songs by John Lee Hooker ("Boogie Chillen") and Muddy Waters ("My Home's in the Delta"), as well as some nods to traditional tunes ("Catfish Blues"). In fact, the performances here pay homage to the rural, country-blues roots these modern bluesmen share. Originally released only in France, ALONE & ACOUSTIC was reissued by Alligator Records in 1991 with five bonus tracks.