One of them is lying. So is the other. 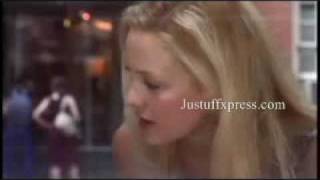 How to Lose a Guy in 10 Days Trailer

Andie Anderson (Kate Hudson) decides to spice up her How-To column in Composure Magazine by venturing out into the Manhattan singles market to see if she can make a guy fall for her, and then get him to dump her within 10 days. Simultaneously, advertising executive Benjamin Barry (Matthew McConaughey) makes a bet with his boss that he can meet a woman and have her fall in love with him within 10 days. Naturally the two of them come together, and, oblivious to each other's wagers, they quickly bond. But when Andie turns off her charms and turns on the dumping tactics, Benjamin must do all he can not to be repulsed by her so that he can win his side of the bet. With Andie unable to comprehend why she can't rid herself of her guy, and with Benjamin frustrated at Andie's peculiar behavior, the two of them begin down the inexorable path toward genuine romance.

This charming romantic comedy, based on the book HOW TO LOSE A GUY IN 10 DAYS: THE UNIVERSAL DON'TS OF DATING by Michele Alexander and Jeanie Long, features plenty of on-screen chemistry between Hudson and McConaughey. For Hudson, her role in HOW TO LOSE A GUY is vaguely reminiscent of characters played by her mom, Goldie Hawn.