Rolling Stone: Ranked #156 in Rolling Stone's "500 Greatest Albums Of All Time" - "[I]t ambitiously stitches together song fragments in a way rarely seen before or since." 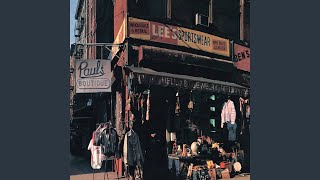 To All The Girls (Music Video)

Rolling Stone - p.72
5 stars out of 5 -- "[A] high-water mark of hip-hop's golden age of sampling....PAUL'S BOUTIQUE became a dense, dizzying collision of lyrical references..."
Rolling Stone - 4/11/02, p.105
Ranked #5 in Rolling Stone's "50 Coolest Records" - "...Their accidental turn into great artists..."
Rolling Stone - 12/11/03, p.134
Ranked #156 in Rolling Stone's "500 Greatest Albums Of All Time" - "[I]t ambitiously stitches together song fragments in a way rarely seen before or since."
Rolling Stone - 2/6/03, p.65
5 stars out of 5 - "...A celebration of American junk culture that is still blowing minds today - even fourteen years of obsessive listening can't exhaust all the musical and lyrical jokes crammed into PAUL'S BOUTIQUE..."
Spin - p.95
"Dense, arty, and with enough production hijinks to fill a junkshop, it honored hip-hop history while predicting the future."
Q - 1/95, p.268
3 Stars - Good - "...betters its Bud-spraying predecessor on all counts: slower, funkier, funnier more diverse in reference....there is upbeat fun...silliness...and brooding invention..."
Mojo (Publisher) - p.118
5 stars out of 5 -- "Put together on samplers with tiny memories, small fragments of staggeringly disparate musics drop in, then are snatched away abruptly; rhythms and melodies remain in focus as textures and sounds constantly shift."
Mojo (Publisher) - 6/00, p.125
"...An album which shredded the rulebook. From 'Psycho' to 'Superfly', from Sly Stone to Ringo's dope beats on SGT. PEPPER, there's so much going on here that it sounds like a compilation....one of the most inventive rap albums ever made."
NME (Magazine) - 11/19/94, p.46
9 - Excellent Plus - "...Five years on from its release way back in August '89, [PAUL'S BOUTIQUE] is still an electrifying blast of cool....If you thought ILL COMMUNICATION was cool, check its younger incarnation..."
Pitchfork (Website) - "PAUL'S BOUTIQUE is a landmark in the art of sampling, a reinvention of a group that looked like it was heading for a gimmicky early dead-end, and a harbinger of the pop-culture obsessions and referential touchstones that would come to define the ensuing decades' postmodern identity..."
Record Collector (magazine) - p.79
4 stars out of 5 -- "[M]usic that seemed to digest all that had gone before it....An astonishing coming of age document..."

The Beastie Boys: Mike D, Ad-Rock, M.C.A.
When The Beastie Boys hit platinum with their debut album, they were instantly labeled the Elvises of rap, accused of being just another bunch of white musicians stealing from black music. But what was overlooked was that the Beasties actually had some interesting ideas to take hip hop to new levels. While in the years to come other white rappers like Vanilla Ice and Jesse Jaymes would prove they were the true cultural thieves, the Beasties defended themselves by recording a seminal rap album, PAUL'S BOUTIQUE. The record was, in fact, so legit that it eroded their commercial appeal in middle America.
PAUL'S BOUTIQUE is a sample-fest--a post-modern epic of cut and splice studio wizardry. Taking snippets of music from sources as disparate as Curtis Mayfield, The Beatles, B.D.P., The Ramones and The Jaws soundtrack (as well as countless others), they built songs out of the debris of modern culture. Over these mind-blowing tracks, they weaved tall tales, self-promotional proclamations and sheer non-sense into a singular vision of inspired lunacy. Besides Public Enemy, no one else was producing albums as complex as this. PAUL'S BOUTIQUE sounds two or three years ahead of its time, perhaps this is why the album was considered such a failure upon its release.
Whatever the case, there really is no album that sounds quite like this one does; the Beasties returned to the top of the charts a few years later with CHECK YOUR HEAD, but they may never be able to top the originality and depth of their stunning sophomore effort.