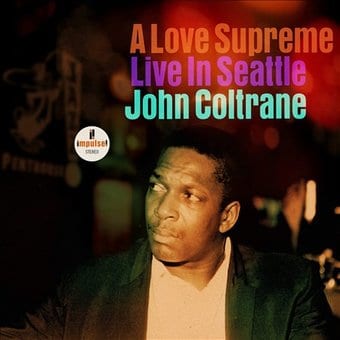 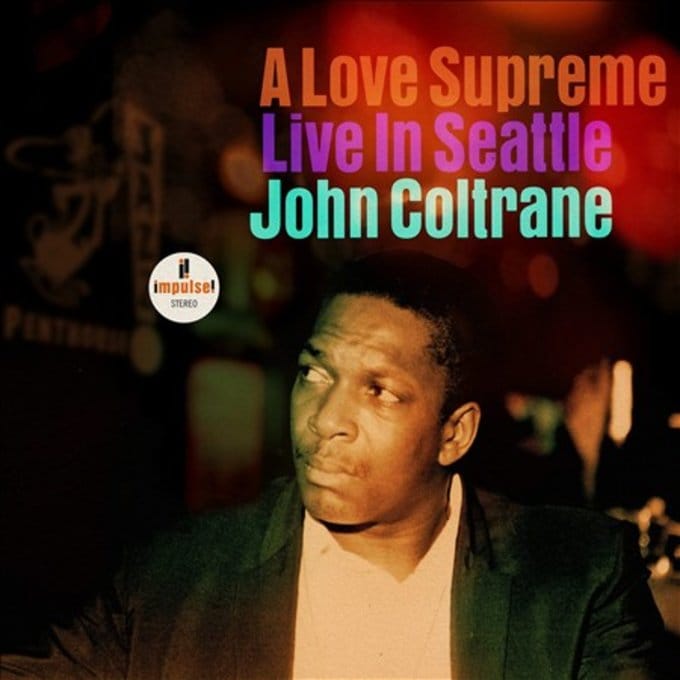 Recorded at the Penthouse Club on October 2, 1965, A Love Supreme: Live in Seattle sat in the archive of musician/educator Joe Brazil (he played flute on John Coltrane's OM, recorded the day before) for 55 years. Five years after Brazil's death in 2008, family friend Steve Griggs discovered two 1/4" reels containing this performance. This is only the second complete concert performance of A Love Supreme to see the light of day; the other is from a July 1965 concert in Antibes. The saxophonist's quartet with McCoy Tyner, Elvin Jones, and Jimmy Garrison was nearing its end; they were already augmented by bassist Donald Garrett and saxophonist Pharoah Sanders. Rounding out this septet is alto saxophonist Carlos Ward, who was invited to sit in that day. Brazil used an Akai reel-to-reel tape recorder and two microphones. While the drums sound a bit hot in places, and 'Trane goes off-mic occasionally, the sound is quite good. This performance almost doubles the length of the studio album and is 20 minutes longer than Antibes. In addition to the suite's four movements -- "Acknowledgement," "Resolution," "Pursuance," and "Psalm" -- are four improvised solo interludes.
Opener "Acknowledgement" is nearly 22 minutes long. Other than Coltrane's familiar flutter on the thematic introduction, this piece is almost unrecognizable for 15 minutes. The interplay between bassists is canny. Garrett uses a bow while Garrison strums chords, and Tyner offers chordal counterpoint as Jones double-times on ride cymbals. Coltrane and Sanders trade solo spaces with Ward interjecting tentative bursts. The four-note theme isn't really heard until minute 16. The vocal chant is absent, replaced by bass and percussive themes that lead into the first interlude, a short shared bass and percussion solo. "Resolution" emerges with Coltrane stating the theme briefly. Tyner enters, expands the frame, and signals Ward in. Initially uncertain, he adds sparse, dissonant notes and flurries for a few moments and then grabs onto the rhythm section's tough modal swing and rips the tune wide open with a killer solo, followed by Sanders and Coltrane blazing scorching trails through the tune. After a six-minute drum solo interlude, "Pursuance" begins with Coltrane stating the theme, then Sanders breaks it into pieces with a long, labyrinthine, and furious solo. Tyner supports with sharp, chromatic asides before taking his own long, imaginative solo and dueling with the bassists and Jones. Coltrane doesn't solo at all. "Psalm," with its trademark bluesy tenor intro, stays closest to the studio recording. Coltrane takes only a minute to begin ascending but fades before he reaches a peak as Tyner and Jones envelop him. Coltrane begins rebuilding the tune, reaches an inner pinnacle, then dissembles it again amid bowed basses, Tyner's sparse middle register, and Sanders' Tibetan prayer bells. The audience responds with stunned silence for a few seconds. It's a startling performance. The package design is simply stellar and the liner essays by critic/historian Ashley Kahn and Coltrane biographer Lewis Porter are educational, authoritative, and indispensable. ~ Thom Jurek

38%off
The World of Contemporary Jazz Groups
$4.98 on Sale
Add to Cart