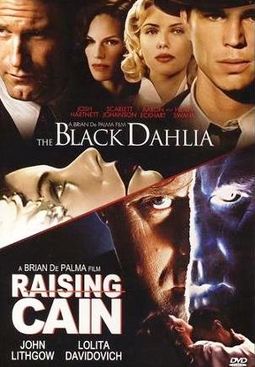 10 ratings
Currently Out of Stock: We'll get more as soon as possible
Notify Me When Available
Add to Wishlist
Format:  DVD
item number:  XTX 16073D
91% recommend us!

The Black Dahlia
Two ambitious cops investigate the shocking murder of an aspiring young starlet. With a corpse so mutilated that photos are kept from the public, the case becomes an obsession for the men, and their lives begin to unravel.

Raising Cain
Carter Nix is a respected psychologist, loving husband and devoted father who decides to take a year off to help raise his daughter. Carter's wife Jenny is pleased to have her attentive husband home -- at first. When Carter shows obsessive behavior toward their daughter, Jenny becomes concerned, and to complicate matters, Jenny's old flame re-enters her life. But nothing can prepare her for the emergence of Carter's multiple personalities and a fiendish plot to recreate the infamous experiments of his deranged father.

With his family's fortune at stake, as well as his life, a young man (Matthew Modine) makes a wager with a lustful countess (Faye Dunaway).