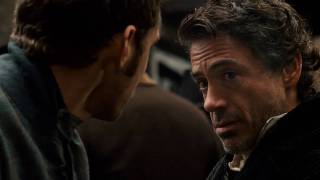 The hangman did his job, Dr. Watson declared the condemned man dead... and yet Lord Blackwood has emerged from the tomb to assert his deadly will over 1890 London. Is he in league with the forces of hell itself? Is the whole Empire in peril? It's a mystery macabre - and only Sherlock Holmes can master it.

Robert Downey Jr. and Jude Law put memorable imprints on Holmes and Watson in this bold new reimagining that makes the legendary sleuth a daring man of action as well as a peerless man of intellect. Baffling clues, astonishing Holmesian deductions, nimble repartee, catch-your-breath scenes of one slam thing after another - director Guy Ritchie helms the excitement reintroducing the great detective to the world. Meet the new Sherlock Holmes!

Though Guy Ritchie (SNATCH) is best known for directing modern crime films set in England, he turns back the clock more than a century for this mystery inspired by Arthur Conan Doyle's classic characters. SHERLOCK HOLMES is based on a comic book by Lionel Wigram, and stars IRON MAN's Robert Downey Jr. as the titular detective. Jude Law (COLD MOUNTAIN) stars as Watson, while Rachel McAdams (THE NOTEBOOK) plays Holmes's rival Irene Adler.

Pirates of the Caribbean: On Stranger Tides
$9.10 Super Savings
Add to Cart

Sherlock Holmes: A Game of Shadows (Blu-ray)
$5
Add to Cart